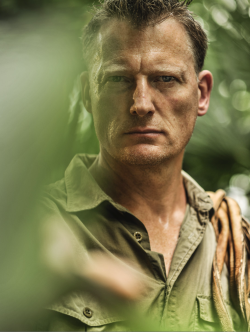 Benedict Allen is an explorer, writer and filmmaker. He is known for his ground breaking television work and for recording his arduous and treacherous exploits without a TV crew. His technique has been to sink into remote communities, placing himself in the hands and at the mercy of these people and their environment, learning to survive from them alone. By single-handedly capturing his experiences on film he has created ground breaking, spontaneous and authentic programming. In 2013 Benedict was included in the Daily Telegraph’s list of Britain’s “Great Explorers” – the only other living adventurer being Sir Ranulph Fiennes. His presenting work includes the major eight-part reality epic Exhibition Africa (2009) for the History Channel, Unbreakable (2008) for Channel Five, and Travellers’ Century (2008) for BBC4.  His six BBC series include Skeleton Coast, Edge of Blue Heaven, Last of the Medicine Men and Ice Dogs. Benedict presented Adventures for Boys: The Lost World of Ryder Haggard, and was an expert contributor for BBC2’s Extreme Dreams. Benedict has written two bestsellers, his 10 books include The Faber Book of Exploration and Into the Abyss. He has written numerous articles for magazines and newspapers.