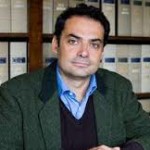 Gianumberto Accinelli is an Italian entomologist and writer, passionate about urban ecology. As the CEO of Eugea, a social enterprise startup of the University of Bologna, he dedicates his time to educating the public about ways to create ecological habitats in our cities. He writes for several journals, participates in various national TV programs and conducts his own Radio Program called “Un mercoledì da Mosconi» on Radio città Fujiko”. In the 2011, Gianumberto was selected as one of the twenty people that have been changing Italy.