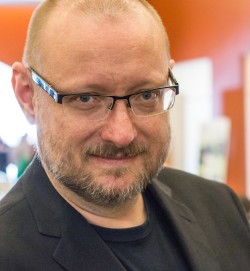 Selected by Foreign Policy magazine as one of their Top 100 Global Thinkers, Jamais Cascio has explored the intersection of environmental dilemmas, emerging technologies, and cultural evolution for nearly 20 years. Cascio currently serves as a Distinguished Fellow at the Institute for the Future in Palo Alto, California. In 2009, Cascio published Hacking the Earth: Understanding the Consequences of Geoengineering. Cascio’s written work has appeared in the Atlantic Monthly, New Scientist, and the New York Times, among many others. He has been featured in a variety of films and television programs on future issues, including National Geographic’s 2008 documentary on global warming, “Six Degrees,” the 2010 CBC documentary “Surviving the Future,” and the 2013 documentary “Fixed: The Science/Fiction of Human Augmentation.” Cascio speaks about future possibilities around the world, at venues including the Conference on World Affairs, the National Academy of Sciences in Washington DC, and TED.