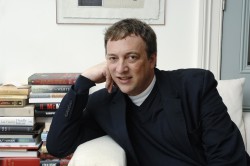 Misha Glenny is an award-winning journalist and historian who has travelled around the world, interviewing men and women involved in organised criminal activity. His book McMafia is now in production as a major new BBC 1 drama series. His latest work, Nemesis: One Man and the Battle for Rio, is the gripping story of the man who ran the largest slum in Rio as head of the local drugs cartel. Based on 30 hours of interviews with the man along with his family, friends, enemies and the police who investigated his operation for over forty years, Nemesis has attracted glowing reviews and is also the subject of multiple film and television bids. Misha’s work on organised crime follows his distinguished career as a BBC Correspondent in the Balkans and Eastern Europe.