GFDRR and the World Bank’s East Asia Pacific (EAP) Disaster Risk Management team recently partnered with noted game designer, Dr. Pablo Suarez, to simulate the decisions that Argentine officials might have made ahead of the 2013 floods in La Plata. For participants from the World Bank and George Washington University, this “serious” game changed the way they see disaster risk management and illustrated the importance of access to open data in driving evidence-based decisions.

This interactive training day was part of the Open Data for Resilience Initiative (OpenDRI), a program organized by the GFDRR Innovation Lab. OpenDRI helps stakeholders better understand their disaster risk through a suite of capacity building and technical assistance activities. These activities include: 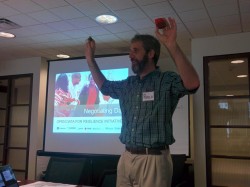 OpenDRI uses a suite of complementary open source tools that supports each of the activities. These include GeoNode, a data repository for storing geospatial data;OpenStreetMap, an editable, open map to collect new geospatial data; and InaSAFE, a disaster scenario impact tool that helps visualize risk.

Participants actively engaged with these open-source toolsets before applying those new skills to decisions around disaster risk management. They worked on a common challenge: how to ensure that resources are spent wisely. They had to find a balance between funding the retrofitting of the schools that were most vulnerable to flooding versus outfitting the other schools with computers and food/water stockpiles or some combination of both.

The training structure did not follow the ‘death by PowerPoint’ format; it was designed in the form of a game where two teams of nine people competed to build the most optimal allocation of scarce resources for schools at risk of flooding in the city of La Plata using primarily InaSAFE. Toggling between theory and practice highlighted the importance of free and open-source geospatial software in decision-making, while exposing the need for open data to drive shared analysis and negotiation over resource allocations. 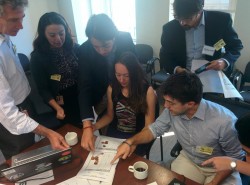 In expanding the work of bringing the open data movement to bear on resilience challenges, GFDRR will be offering additional training sessions in OpenDRI in November. For more information, contact Vivien Deparday, vdeparday@worldbank.org